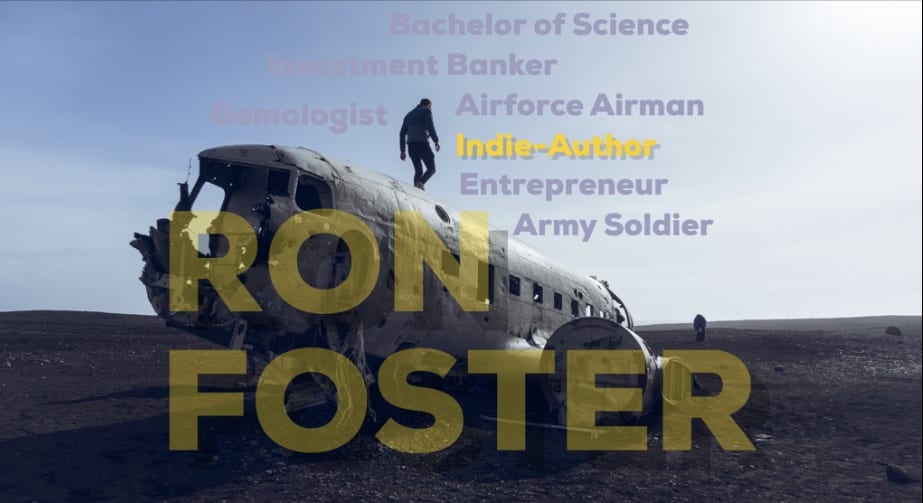 Imagine for a second that some sort of apocalyptic scenario, so often depicted in popular fiction, had occurred. No electricity, no infrastructure and just like that you are on your own, having to provide for yourself and live off the land. Remember the lines are down and you can’t call Domino’s Pizza or a deli-take-out while you figure out what you should do. When no Uber responds and your internet is down and your sanity is in jeopardy as you can’t stream your favorite tunes, to get you in the right state of mind. When all seems bleak – you would be happy to remember you had downloaded a couple of Ron’s books.
Why? With over 65 books and counting, his books even when fiction, is saturated with survival know-how.

It is a lot of work because I don’t just write the books – I do cover design, formatting, recruiting narrators, marketing etc. I do have the satisfaction of working for myself however which allows me to enjoy the freedom it gives me..

My survival skills have evolved over the years from basic bush craft to adapting to a variety of environments with new approaches. Currently my bugout vehicle of choice as well as survival platform is an inflatable boat that I figured out how to solar power.

Back in 2003 I wrote The Rural Ranger which was about a lot of survival tricks I learned growing up or from the military. I mainly wrote them down because I caught myself forgetting many and wanted to share with other generations. Several years later I finally went to college and got my first bachelor degree at 50 and basically started writing fiction for the money mostly but also to get my emergency preparedness message out.

Dont get caught up in the details or seek too much advice from others authors, just write and develop your own style and try to get better every book.

I am going to try to get to a hundred books published in my lifetime as a milestone of sorts. I think the prepper community will still be going strong and interested in my genre but if not I write fantasy also..

“The store’s owner flinched as Dump blocked out the light coming in the door, but he soon affably regained his composure and began his mantra for the occasion. “Bad day, Bad day for everyone my friends, cash only, no power, cash only! You buying something today mister?” he inquired. The stores owner said all this with a thick accent and all in one breath about as fast as he could in a lilting sing song way.
“No problem” I replied. The Dump had already agreed to let me do most of the shopping so he started moving quick towards the water and me towards the can goods. Six cans of tuna cleaned out the shelf, $3 a piece (damn the prices) two cans of Vienna sausages ($4.50) some crackers and hard candies, and my $6.50 pack of cigs I met Dump at the register and he had 12 bottles of water at a $1.75 a piece. We got out the door with about 3 bucks change. This stuff was way to awkward to be toting around in thin plastic bags I thought and told Dump put his bags on the park bench out in front of the store and I would see about repositioning our load.
I was about to start cutting the sleeves off my jacket and rigging them up to make a sort of pack mule collar for my buddy to carry with my tie as a strap, when I spied what appeared to be a painter’s van at the corner of the road.
Hang on a sec “Dump Truck” I will back in a minute. I was looking at all the people standing around or hurriedly passing by to see if anyone looked like a painter as I approached the vehicle… The catastrophe had only hit a few hours ago and the owners of the van might still be in the area. I checked the backdoors of the van and was in luck, they were unlocked. I peered inside and saw stacks of tarps. Bingo, I grabbed two of the smallest and then crawled up into the van with several fervent looks around to see if anyone was taking particular notice of my actions. I moved some buckets out of my way and saw a couple of those cheap disposable plastic painters tarps you can buy at the dollar store that are small enough to put in your back pocket and snagged them and a piece of frayed nylon rope about 10ft. long.
I popped out of the van and carried my loot back to Dump, who was looking bewildered and worried at my antics.
“What are those for David?” he inquired. “I thought you might have been coming back with a 5gallon bucket or something to tote this shit in”
“Live and learn my big friend, I am going to show you how to make a horseshoe pack out of these tarps” I replied.

This pack is simple to make and use and relatively comfortable to carry over one shoulder. Lay available square-shaped material, such as poncho, blanket, or canvas, flat on the ground. Lay items on one edge of the material. Pad the hard items. Roll the material (with the items) toward the opposite edge and tie both ends securely. Add extra ties along the length of the bundle. You can drape the pack over one shoulder with a line connecting the two ends
I folded my coat in one of the tarps and divided up our purchases between our two packs. I thought about making him carry it all, but if something happened to him or we got separated, I needed my half of what few supplies there were. We set off back on our journey looking a bit out of place with our paint spotted packs slung around us, but we didn’t care, we knew the road ahead was going to be long and the weight of some food and water no matter how we were carrying it was reassuring.
“What cha in the mood to eat Dump Truck?” I said to the puffing sweating behemoth beside me.
“What are you talking about, David?” he responded.
“We going to hit a block of restaurants in the next mile or so” I offered.
“Fat lot of good that will do us,” then he hesitated. “What do you have in mind?” he said with a conspiratorial look.
“Well, the way I see it we are 5 or 6 hours into this thing. The recognition of the SHTF is now just dawning on the majority of the Sheeple, but look around the parasites are already gathering to plot and scheme some dastardly deeds”.
“Yeah, I been noticing that last mile or two,” said Truck. “The homeless and the gang banger types are seeming to be coming out of the wood works and just waiting for nightfall or something else to happen”.
“Exactly,” I responded. “Let’s take a break and I will tell you my plan.”

Hope you enjoyed this week’s #indieauthor feature!
If you would like to know more about the featured author you can find him on twitter as @SolarPrepper and make sure to check out his collection of audiobooks.

If you know someone who should be featured, be sure to leave a comment.
This blog is brought to you by T.A.C
Photo cred to Dean Maddocks @deanmaddock

Join us next Wednesday for another #indie-author!