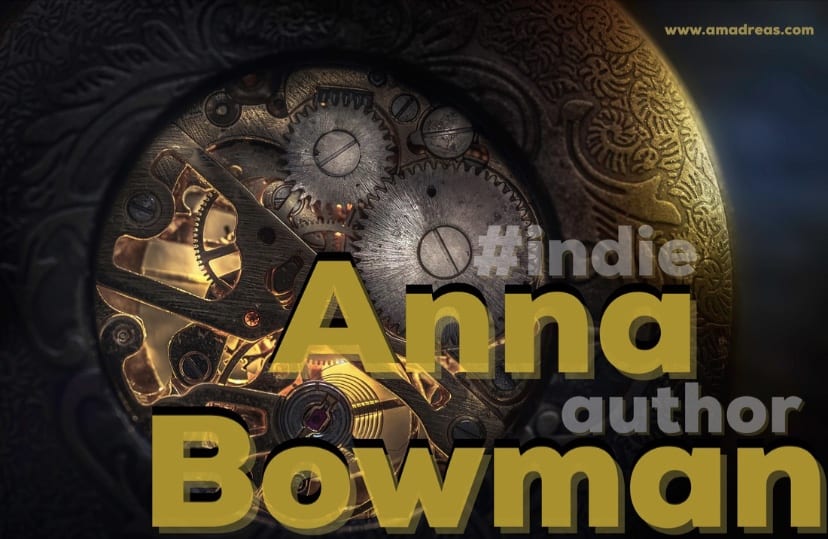 Take a day-dream – you know one of those when you sit with wild thoughts of what the future might look like and get yourself lost in what might come to be technologically – now imagine that you were back in say the 17th century and you were having that same day-dream based on the technology of that time – got it? Okay, now add in a sprinkle of comedy, a whiff of potential romance and seven cauldrons of adventure! Stir it all together and spread it out on a time-line – and voila – you have yourself some steaming Steam-Punk.

That’s one way of explaining it – or one could explain it like a dictionary:
Definition 1: a genre of science fiction that has a historical setting and typically features steam-powered machinery rather than advanced tech.

Steam-punk is that day-dream and the gods of those day-dreams are the authors. That leads us to the inevitable conclusion that this week’s featured #indieauthor Anna Bowman is in fact a god. She adding to the fire first started by the likes of Jules Vernes and H.G Wells and has added her own personal flare to the genre – check her out!

What does being an indie-author entail for you?

Being an indie-author entails a lot of fun and a lot of work. The writing and creating an entirely different world with characters, who I hope appear real to the reader, is the fun part. Obtaining an editor, proofreading, cover-design, feedback–all of that is a lot of work, but it is necessary to have something I’m proud of when it’s all said and done. And I wouldn’t change the indie part of author because I want full creative control over my work.

For those who aren’t familiar with the genre – could you tell us what steam-punk is and why is it your genre?
A typical steampunk novel is set in Victorian London with steam as the main power source. Mine does not necessarily fit into one genre. It is set in the future on an entirely different planet with a mix of technologies, one of which is steam. It may not be the best representation of a solid steampunk genre, but it was the closest thing it would fit into.

Did you choose it or did it choose you?
A little bit of both. I like the genre, but it is extremely hard to find steampunk novels that are appealing to me. They usually promise excitement or other element and fall flat. I hope mine doesn’t do that.

You have gotten your book “Black Recluse” out there and circulating – but let’s hop back to when you decided to be a writer, what set it in motion?
I don’t believe I ever had a choice. I think I was around ten when I first started writing… badly. Ever since then it was just something I did. There were years where I didn’t write anything, but it always came back around. It’s not something I could really stop doing.

What is one piece of advice you would give an author starting out on his/her first novel?
I would say don’t try to do it alone. Find some good mentors who are willing to give you advice and encouragement and acknowledge that writing, like everything else, requires honing. It makes it so much easier to improve when you have people that are willing to tell you what you need to improve on and what you do really well.

And finally – what’s the dream?
And the dream? Best seller! Make “steampunk” the next “thing.” Haha, not really. I will write regardless, but it would be nice to be able to make a meager living off of doing it.

Hope you enjoyed this week’s #indieauthor feature!
If you would like to know more about the featured author you can find her on twitter as @AEBowman3 and make sure to show some love and check out her book Black Recluse on Amazon.

If you know someone who should be featured, be sure to leave a comment.
This blog is brought to you by T.A.C.
Photo cred to Zoltan Tasi @zoltantasi